Chess With a Child 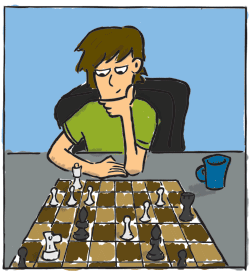 Lately I’ve been getting more and more into playing chess. I had played a bit with my dad when I was a little kid but hadn’t really thought about it much since. Then a year or so ago I started playing online chess with some friends at work. I was REALLY bad and lost constantly. Since then I’ve been studying and playing a lot more and I think I’m getting better and I’ve really been enjoying the process. If you’re interested in playing me, I play as dschwantes on chess.com.

But this post isn’t really about me learning chess. It’s more about a game I played a few weeks ago.

I had convinced Eileen to go play chess in a coffee shop with me one Sunday evening. We were just going to play a very friendly, open game because she doesn’t really play and last time we played she got really mad that I beat her (and refused to play chess with me ever again). We were sitting at a table next to a family with two young children, maybe 4 and 6 years old and as we started our game, the older child kept craning his head over to our table. Eventually his willpower failed him and he just came straight over and sat next to Eileen, asked what she was doing, and started suggesting moves.

His parents came over to apologize (and retrieve their stray child) and the father explained that he had started to introduce his son to chess a little while ago. Eileen and I were just having a friendly game so we ended up inviting the kid to play “on Eileen’s team” and his parents helped them pick moves too. It was a completely casual game with everybody helping to look for the best moves for both sides and none of us (adults included) were particularly strong players.

The kid couldn’t sit still for 30 seconds and spent the whole game wiggling around and leaning on Eileen and looking at the board from different angles but the game kept his attention, which was really impressive. It wasn’t the game I had planned on playing but I think we all had a lot of fun. It felt good to help entertain a kid with something productive and it was just a genuinely enjoyable encounter with some random, nice strangers in a coffee shop.