In My Head, Behind The Music

I just finished writing and recording a fun keyboard-heavy powerpop song called In My Head and in an act of self indulgence I’d like spend a blog post going over some of what into the song. (Pro tip: You can scroll down and start playing the song while you read the rest of this!)

With this song I wanted to just write something straightforward and not get hung up on trying to write anything super technical. I ended up with a simple intro - verse - chorus - verse -chorus - bridge - chorus structure and I tried my best to not overthink the lyrics (more on those later). By not getting bogged down worrying if my basics were interesting enough I was able to get a solid chord progression and structure down and then build off of it. 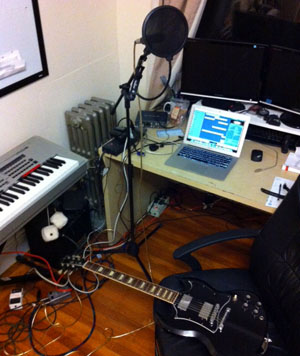 The song started with just guitar recorded over a click track. Rather than trying to set up and mic an amp I ran my guitar through my homemade overdrive pedal and then a clean amp model in Garageband. Once I had my basic structure down I went in to write drum parts. I wrote the drum part by hand placing events on the piano roll set to a drumset sound. I’m sure there are better ways to do this, but it worked for this song and I like the freedom I get by beind able to hand pick every hit in a beat.

I stressed out about my bass tone a bit during this recording session. Usually I need to run my bass through an amp and mic it to get anything remotely usable, but I wanted to get some parts down imediately and plugging in wasn’t an option at 11pm. I plugged directly into my recording interface (an M-Audio Fast Track Pro) and then just put one of the fuzzy Garageband bass effects on the tracks and the sound was actually ok so I ended up keeping it.

From there it was time to play with keyboards! The paino parts are all pretty simple, mainly just to add some depth and tone to the song. I had a lot of fun writing some cool little counter-melodies on the synth. I’ve always had a soft spot for bands like Zolf the Rock and Roll Destoyer and Motion City Soundtrack so I really enjoyed being able to write some really poppy synth driven stuff.

And now lyrics. Like I said, this song was an exercise in not overthinking things. I just sort of wrote the first things that came to mind so this song ended up overtly being a generic pop sound with vauge romantic sentements. That said, the ideas for the lyrics came from watching Doctor Horrible’s Sing-a-long Blog and from spending a weekend home alone when Eileen was out of town.

The deep insight here is that I had a bunch of songs from Doctor Horrible stuck in my head for a long time. They’re really good! You should seriously watch it. That’s honestly the extent of the depth of that chorus, I just kind of took the theme of having something stuck in your head and presented it in a general enough way to make for a good, hopefully catchy, pop chorus.

I wrote a lot of the music for this song over a weekend when Eileen was out of town so when I was looking for lyrical ideas for the verse I decided to just use the theme of being home alone and again present it in a vague way to make it sound like semi-romantic pop. I did take some liberties with the concepts. For example, there was no wine consumed that weekend but it’s harder to find good words that rhyme with whiskey. I did watch copious amounts of TV, mostly The Guild, and I don’t really do a good job of feeding myself or going to bed at a reasonable time when I am left home alone, so there is some truth to these words. I wasn’t as happy with the vocals I got when recording the verses. I just couldn’t seem to get a tone I was totally happy with, but I don’t think it’s too distracting.

I’m really proud of how this song turned out. I had a lot of fun with the style and its always rewarding to hear a completed project that has some complextiy to it. If you don’t want to travel all the way over to Soundcloud to hear the song, you can listen to it RIGHT HERE!