This week, while I was busy with the first week of my new job, I did manage to get some RecLab work done. Also, I’m a few weeks into my drawing class, so I wanted to post an update from that.

While not the most productive RecLab week, I did finish the basic comment functionality for Users, Songs, and Tracks. I also learned about seed.rb and wrote some seed code for the Instruments data. The trick there was that I wanted to be able to run rake db:seed multiple times, so I needed seed code that would let me update or create records. I ended up with a nice solution that lets me break the instruments down into separate arrays by family and then loop through everything to create or update:

Now I’ll need to use a tagging system to attach both Instruments and general Tags to objects. I’m leaning toward As Taggable On, which apparently was written by an old childhood friend of mine. Awesome! 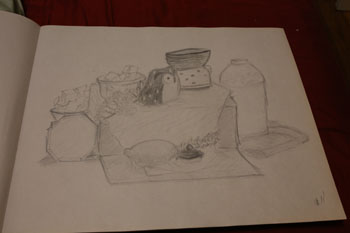 The art class is going well. Value and shading are still pretty tough for me because I’ve spent the last few years just doing line drawings for comics. I also have a tendency to draw pretty lightly (which is probably also a result of erasing pencil lines for comics). I don’t think I’ll leave this class a brilliant artist, but but I’m certainly learning things and getting better.