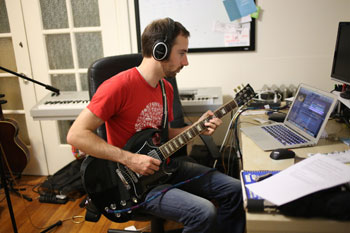 I didn’t really plan to do anything outside of RecLab work this week but yesterday I got in the mood to play and record some music so I ended up with a new recording for this week’s thing.

Eileen and I have been talking about doing more recording together (as Packets and Waves) and after a recent Hurray For the Riff Raff show, we were in the mood to do some old country songs. We settled on doing a cover of Loretta Lynn’s Wine Women and Song. It’s a short, simple song (which was important because we started learning it at about 11:30pm on Saturday night) and I just like the phrase “wine, women, and song”. 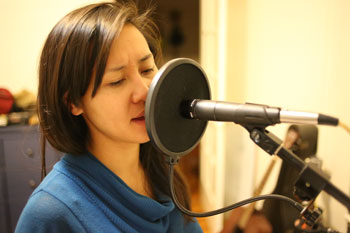 We didn’t want to it be an exact copy of the original so I tried to give it a dirty Black Keys-ish guitar sound and keep the guitar part pretty simple. I resisted to urge to layer on a bunch of random instruments and only used guitar, bass, and drums for most of the song. The piano was only added in the chorus and solo sections, even though I tried a few takes where I recorded some sporadic piano comping throughout the whole. In the end, the stripped down version just sounded cooler.

I’m really coming around the the virtual drummer in Logic Pro. At first I really resisted the idea of letting the software “write” my drum parts for me, but the sound is so much better than MIDI drums and I can actually get some interesting parts. For this song I used “Logan” with a retro sounding kit. I thought the tom driven verses worked out really well.

Eileen’s vocals turned out nicely, as usual. I was tempted to dirty up the vocal recording with a tube mic simulator, but I ended up just using a simple “out of the box” compressor effect, which sounded fine.

This ended up being a really fun little project. It only took a few hours from idea to finished product and the result was really satisfying. Enjoy our cover of Wine Women and Song!