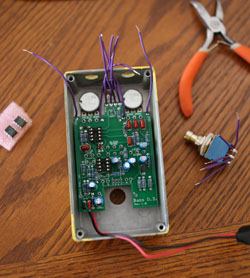 This week I built a bass overdrive pedal. I had received a kit for this pedal for Xmas (as well as an arm for holding circuit boards while soldering, which may be the nerdiest gift I’ve ever received) and I was excited to finally have time to work on it. Last year I built a Tube Screamer overdrive clone from a kit, so I’ve had a little experience building pedals from kits already.

The choice of a bass overdrive pedal was motivated a bit by listening to some newer Ben Folds. He has some great songs on his new record that are really carried by piano and gruff sounding bass. Now that I have this new pedal, one of my upcoming Thing A Week things will hopefully be a song written in that style. 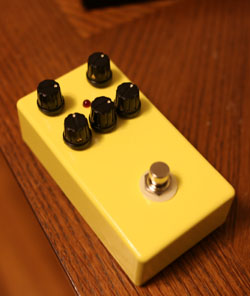 This build was a bit more complicated than the last pedal I built, but I didn’t have any major problems with it. It took a while to solder all the little components onto the board but I actually found it to be very relaxing. It takes a lot of focus but it isn’t really mentally taxing. Soldering was a nice way to unwind after work this week. The biggest addition I made to this build was the choice to paint the enclosure. I had never painted metal before so I had to learn a bit about that (it’s not that complicated). It really just involved sanding the enclosure, priming it, then adding a few layers of indoor/outdoor spray paint. I picked a nice ugly yellow, which ended up looking really cool with the black nobs. I had originally planned to label the nobs and draw some sort of design, but I just didn’t find anything I like so I kept it totally clean, which ended up being a nice look.

The tone of the pedal itself it pretty cool. It has treble and bass levels as well as a blend control which lets you blend the drive and clean tones nicely. I did a quick recording so you can hear what it sounds like. I started with a clean bass sound for comparison then turned on the overdrive.

It felt good to finish a Thing A Week project, I was a little worried about the viability of this project after falling short the first week. Next week I will probably try to do something artistic, maybe comic related.