Many good projects come from scratching your own itch. I like to track thing.

Over the past few years I’ve had on and off bursts of focus on practicing. Practicing guitar, drawing, chess, things like that. And I always find value in quantifying how often I’m practicing. I like to know how many hours per month, week, year, etc. I’ve spent on that skill. I feel like, as long as I’m practicing the right things, I can feel good about the progress if I can see a history of it. Plus wanting to see the numbers can help make sure I stick with things.

In the past I was just writing simple Markdown docs and then ran a small Sinatra app that pulled metadata out of that directory and gave me some historical stats. I called that system Input Coffee.

I figured I could automate things a bit more and build something a bit more reusable, so I decided to build a small command line based tracking app, Trackstar. I recognize that this type of interface only appeals to a very select group of people, but that group includes me, so I built it.

It’s pretty bare bones right now and I’d like to iterate a bit on the interface (I do thing command line apps can have nice interfaces). I’d also like to do a lot more around the stats, maybe even pull in the Sinatra app/web based visualizations of the data to get a better history, we’ll see. For now it’s kind of fun to keep it as a purely terminal interface.

The whole thing is just built in Ruby and could probably stand to be optimized a bit, but it was fun to build a gem that was a pure executable thing, rather than a library. You can check out the code and full instructions for how to use it on the GitHub repo.

I’m currently dog fooding it by tracking my guitar practice. So far it’s working pretty well and I’m making tweaks as needed. If this scratches a specific itch you have, try it! 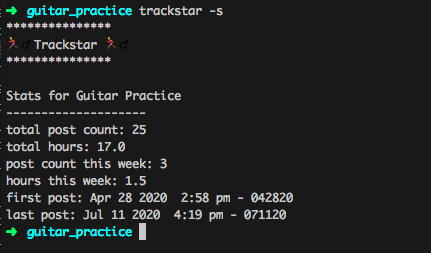